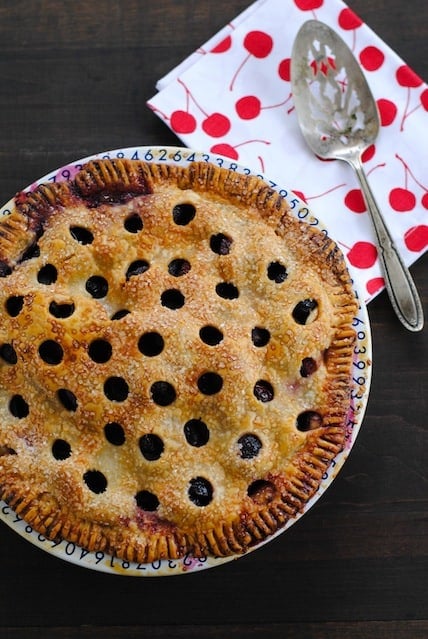 In this monthly series, I commit to cooking whatever is on the cover of Bon Appetit, Saveur or maybe some other food magazine. There’s a reason these particular dishes are on the cover – they’re usually (but not this month!) the best recipes in the magazine.

The cover of the June issue of Bon Appetit had a big ol’ cherry pie on the front. I am obsessed with fresh cherries – they usually don’t make it into any baked goods, because I’ve been known to demolish a 3 pound box of them in a few days, using only my mouth. I decided to give baking with cherries a whirl this month, and the results were disastrous. Basically, the filling was completely liquid, like a cherry soup surrounded by crust. Help me figure out what went wrong, won’t you? 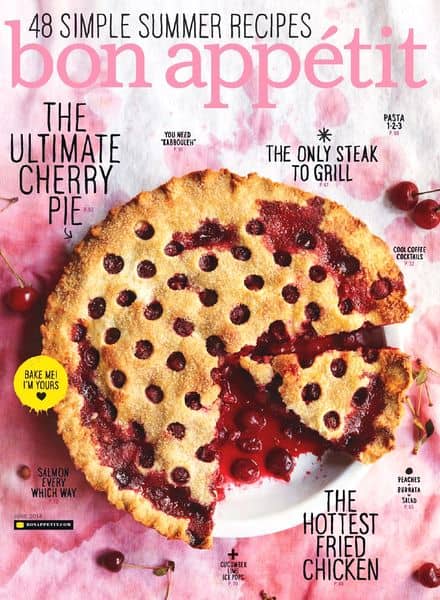 Here are some deviations I made from the original recipe, as published in Bon Appetit: 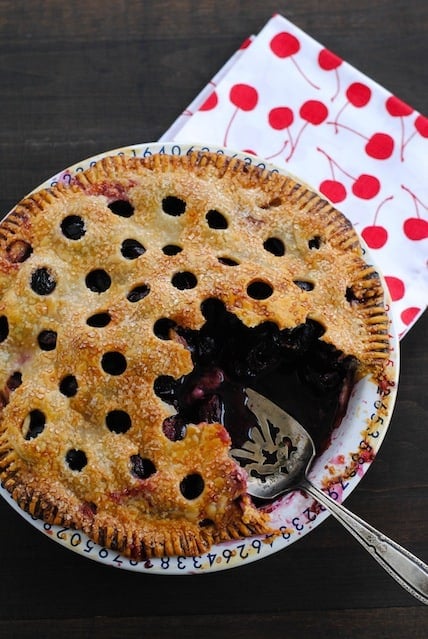 Of these factors, I believe that store-bought crust, increased lime zest, not liking pie, using a Pi plate and oven temperature were non-issues in the filling not thickening properly. Not being baked with love could have been a minor factor, as I know from experience that food made when you’re in a bad mood never turns out as well as food made when you’re happy to be in the kitchen.

I believe the biggest variable was that I used sweet cherries instead of sour cherries. Knowing that my cherries would be sweeter than what was called for, I *thought* about decreasing the sugar in the recipe, but decided to use the amount called for, even if that meant a too-sweet pie, for fear of the filling not thickening enough with decreased sugar. I’m wondering if sweet cherries are just much, much juicier than sweet?

I’m also wondering if I had baked this pie longer, would the filling have thickened? Perhaps, but I honestly can’t see an extra 8 or 18 minutes of baking time making that big of a difference. All fruit pies seem liquidy when you pull them out of the oven, but then they firm up as they cool. It seems impossible to know how much a pie will firm up. 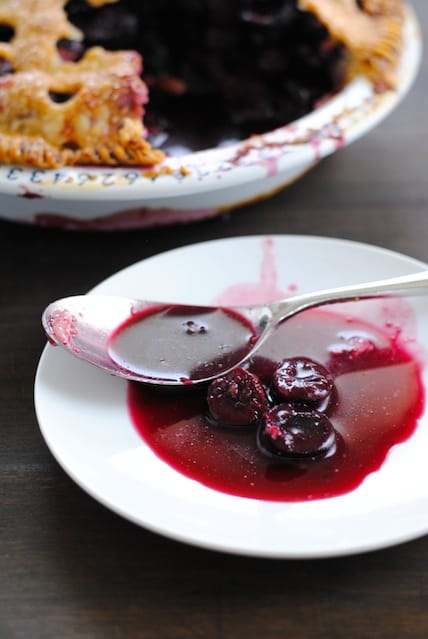 Where do YOU think I went wrong here? Don’t be shy! I’d love to hear your thought as to why this pie was an epic failure.

Note: One of my biggest pet peeves is when people make a recipe they see online, but with changes and substitutions, and then leave a negative review on it, anyway. So this is NOT a negative review of Bon Appetit’s recipe. I flat-out didn’t follow the instructions, and used sweet cherries instead of sour. I have nobody to blame but myself.