Lemon and Artichoke Couscous with Shrimp 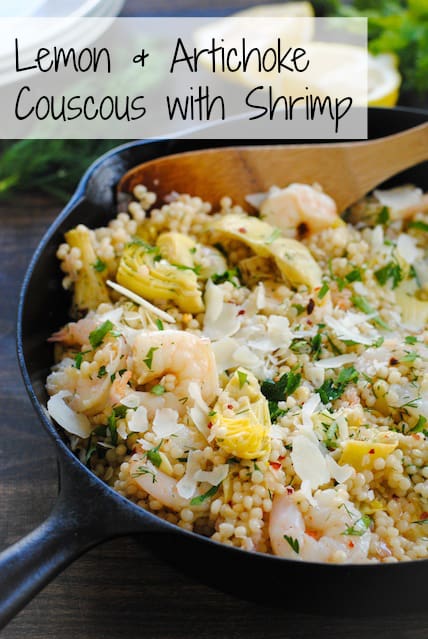 I ate my first artichoke recently. Well, it wasn’t my first time eating artichokes, really. But it was my first time eating a whole artichoke.
I was in California for a wedding, and my mother-in-law and I were killing some time one afternoon. We stopped at a place in downtown Huntington Beach for a light lunch.
On a whim, I decided we should order the whole grilled artichoke, as I’d never had the experience of eating a whole artichoke. I’d always heard it was a fun/tasty experience, but had never tried it for myself. The whole use-your-teeth-to-scrape-the-leaves bit. 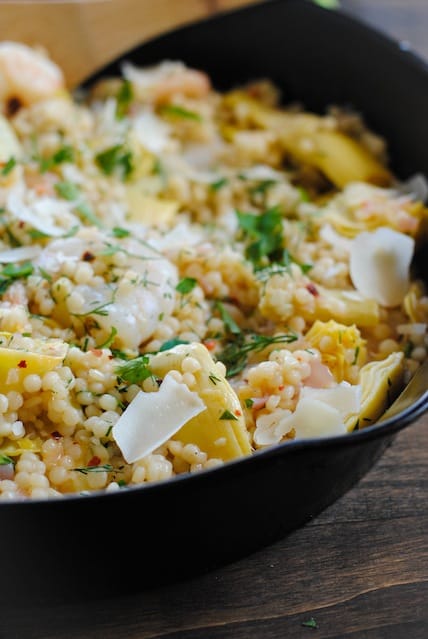 I gotta say, it wasn’t all I thought it would be. Part of the reason for this could be that there was a very long delay from the time the artichoke was served to when we actually got plates and silverware to use with said artichoke.
So, it was a cold grilled artichoke. But beyond that, I just didn’t get it.
I used my teeth to scrape the minuscule bit of meat from the leaves. I dug out the artichoke heart (trying to avoid the choke) and ate that. It seemed like a lot of work for hardly any flavor.
It came with butter and some sort of mayo for dipping, but since the artichoke itself had very little flavor, it seemed silly to use the leaves as purely a vehicle for condiments.
Maybe this was a bum artichoke. Maybe the restaurant stunk at preparing it. Are artichokes supposed to be better than this? Meh. Not impressed. 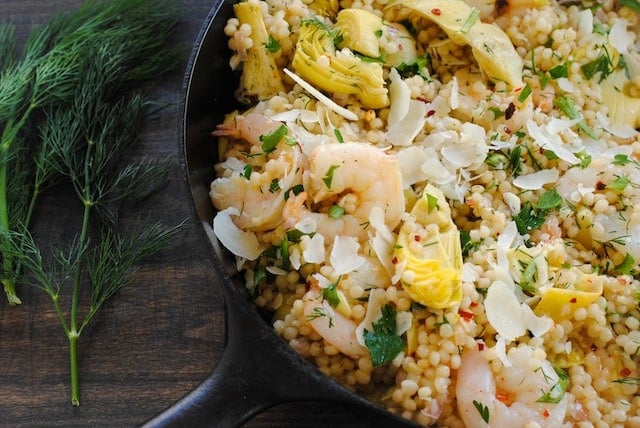 I’ve decided that artichoke hearts and are much, much better than the whole eating-the-leaves bit. And unlike most vegetables, I prefer them canned.
They’re easy, they’re cheap, and they taste great! In my opinion, fresh artichokes simply aren’t worth the trouble, especially for a quick weeknight skillet dish like this.
I cooked up some Israeli couscous (which I also love with almond crusted chicken), then tossed it with a bunch of lemon, herbs, shrimp, artichoke hearts and cheese. If we’re talking about artichokes, I’ll take a big bowl of this couscous with shrimp and artichokes any day. 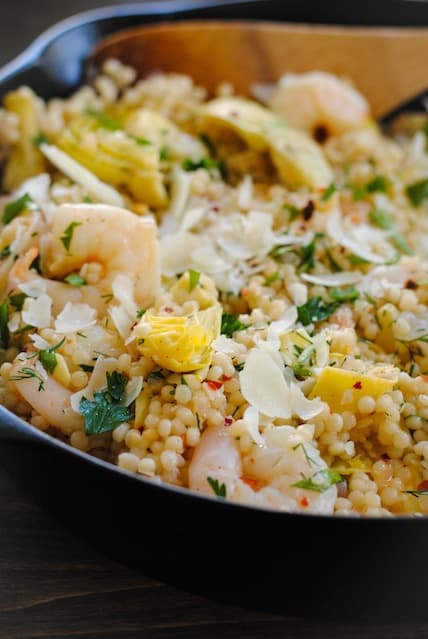 22 comments on “Lemon and Artichoke Couscous with Shrimp”