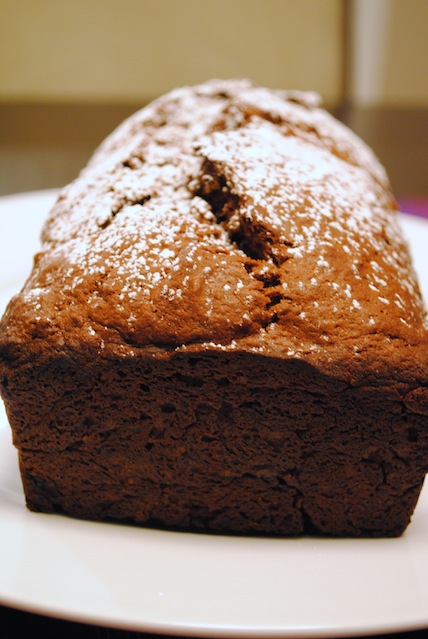 In an effort to force myself to actually make some recipes from the cookbooks I buy (instead of watching them collect dust on the coffee table), I’m committing to a once-monthly blog post I’ll call “Cook The Book.” Not to be confused with my other monthly “If I Liked It, Then I Should Have Put A [3] Ring [Binder] On It” posts, these dishes may not necessarily be ones I’ve made again and again (yet). This is just my effort to try out some cookbook recipes and share the results with you.
Recipe: Chocolate Banana Bread from Tyler’s Ultimate: Brilliant Simple Food to Make Any Time
(because I’m a bit uncomfortable just copying the recipe from the cookbook, please buy the cookbook, check it out at your local library, or do a quick Google search for the recipe).
Background: I’ve been watching Tyler Florence on the Food Network for a long time now. My first memory of him was a show (Food 911) where he would ambush home cooks in their kitchens, and help them figure out how to make a meal they’d been having trouble with. Now, my husband and I laugh when we see his shows, because 90% of the time, Tyler is wearing something identical to an item in my husband’s closet. They’re clothes twins! It’s like they have the same stylist…errrr…they both just really like to shop at J. Crew and Banana Republic. Because Tyler’s style of cooking is so similar to my own, I had to have a copy of this cookbook. This recipe was the first I made out of it.
Outcome: Let’s be real here for a minute – banana bread is not bread. It’s banana-flavored cake. Now that that’s out of the way, what’s better than banana bread? Chocolate banana bread/cake. It’s moist and bittersweet. And you can still pretend you’re getting a serving of fruit…because you actually are.
What I Liked: This recipe has an extremely short list of ingredients for a baked good, and it’s all stuff that I generally keep on hand. I like it because it’s intensely cocoa flavored, but it’s not too sweet. The bananas almost become a background flavor. All in all, it’s just damn tasty.
What I Didn’t: The recipe says to bake for 50 to 60 minutes, but in my oven, it definitely takes closer to 70 before you can insert toothpick and have it come out clean. That’s really no big deal, and there were no other issues with this recipe!
Are you a fan of Tyler’s Ultimate? What recipes have you tried from the book, and how did they turn out?
All entries in the “Cook The Book” Series: