This blog series is called “If I Liked It, Then I Should Have Put A [3] Ring [Binder] On It.” I know, naming blog posts after a 5-year-old Beyonce song makes me a huge loser, but until somebody tells me to cut it out, I’m just going to go with it. The title just means that I try out a lot of recipes from magazines and websites – only the ones I really, really like go into a 3-ring binder to keep for the future and make again. 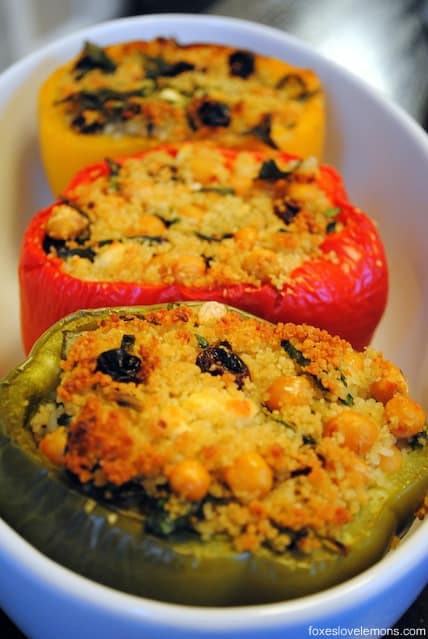 Background: Look, I admit that Giada can be a bit annoying. That random Italian accent that comes out only when it wants to. The twiggy body that is evidence she doesn’t eat much of the food she cooks for her television shows. But you know what? Most of her recipes are really great. I even have one of her cookbooks. I saw her cook these stuffed peppers one Sunday morning, and I immediately went to the grocery store to get all of the fixings so I could make it for dinner that night. I’ve made it countless times since then, and passed the recipe on to my parents, who also love it.

What I Like: It’s the first vegetarian meal I ever made for my husband where he didn’t ask where the meat was. It’s incredibly flavorful, with a nice balance from the salty feta cheese and sweet currants/raisins. The sauce is pungent with garlic and basil in the best possible way. I also use the couscous filling recipe – but instead of stuffing it in peppers, I just leave it in a bowl – and take it to parties as a side dish.

What I Change: I don’t normally keep currants on hand, so I use raisins instead. Also – you need to cut off the tops of the peppers in order to stuff them. Instead of discarding the tops, I chop them up (not the stems, just the pepper part), and throw them into the couscous mix as well. For the sauce, I use regular ol’ sour cream instead of creme fraiche, which is really expensive and not necessary. My peppers are usually done after about 45 minutes, instead of the 55-60 minutes that’s called for.

What recipe have you discovered in a magazine, online or on television that you make again and again? Tell me about it in the comments!