Simple, yet special, recipes for the home chef.
Wondering how to cook bacon in the oven? Follow this two-step culinary school technique to make perfect crispy oven bacon, every time (with no splatters of bacon grease on your stovetop!) 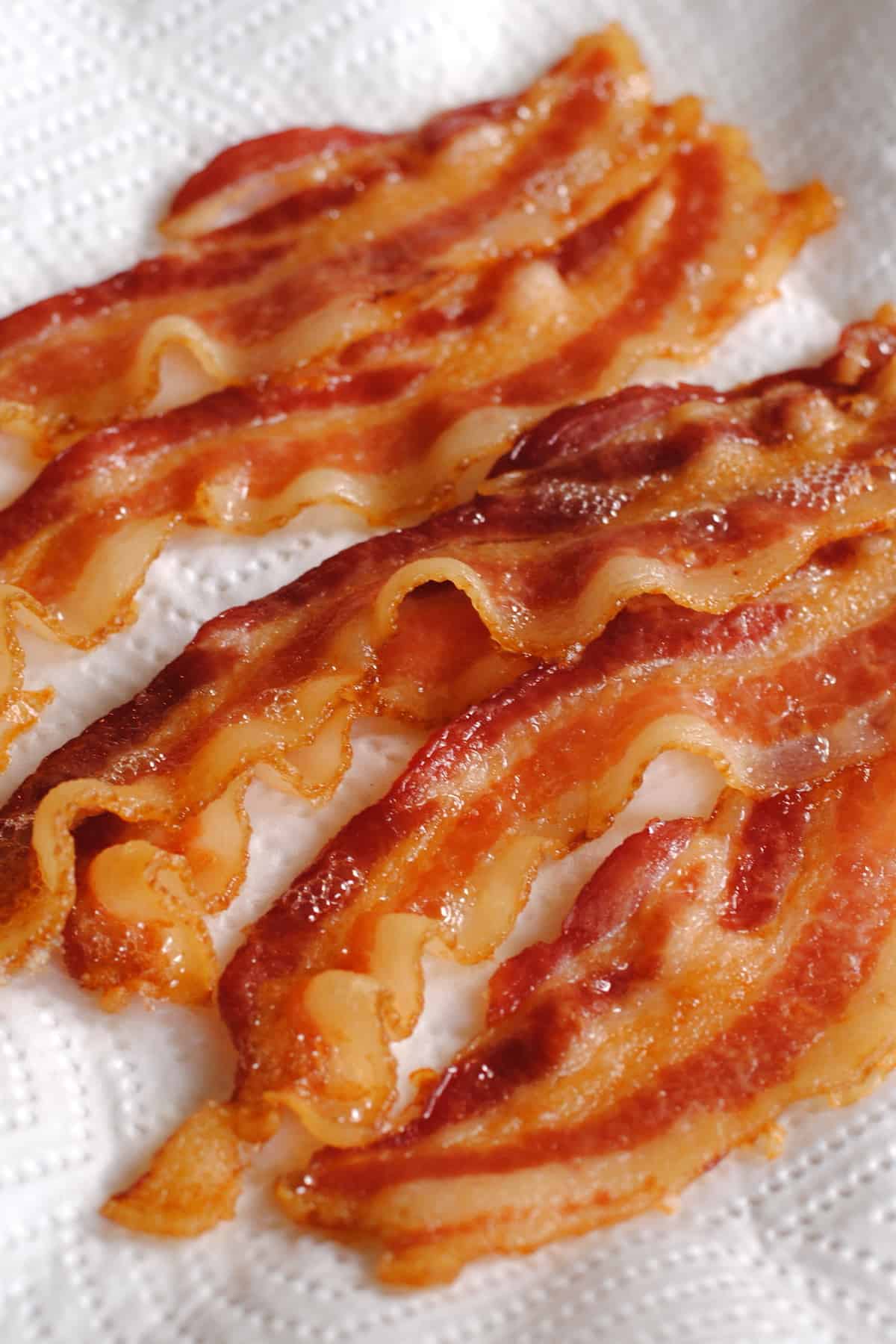 In my “What I Learned in Culinary School” series, I’ll be sharing tips and tricks that I learned from two years of working with some of the country’s best chefs. This will include big things like learning to work efficiently, and small things like how to make bacon in the oven. All of them will be applicable to your home kitchen, making you a faster, better, and more confident cook.

I’m gonna keep it short and sweet today, with a little trick that I’m guessing 80% of people who like bacon already know. However, before I went to culinary school, I was in the 20% of people who had never thought to do this. Granted, for a long time, I wasn’t a big fan of bacon. And I think two major reasons for that were how smelly it makes your house when you cook it, and how big of a mess it is (grease splatters everywhere!).

With this oven baked bacon method, your house will still smell bacon-y, but maybe a smidge less so than with the old frying pan method. Some of the smell is kind of contained to inside your oven. And those grease splatters? Hey – better in the oven than on the counter. My oven has seen way worse. 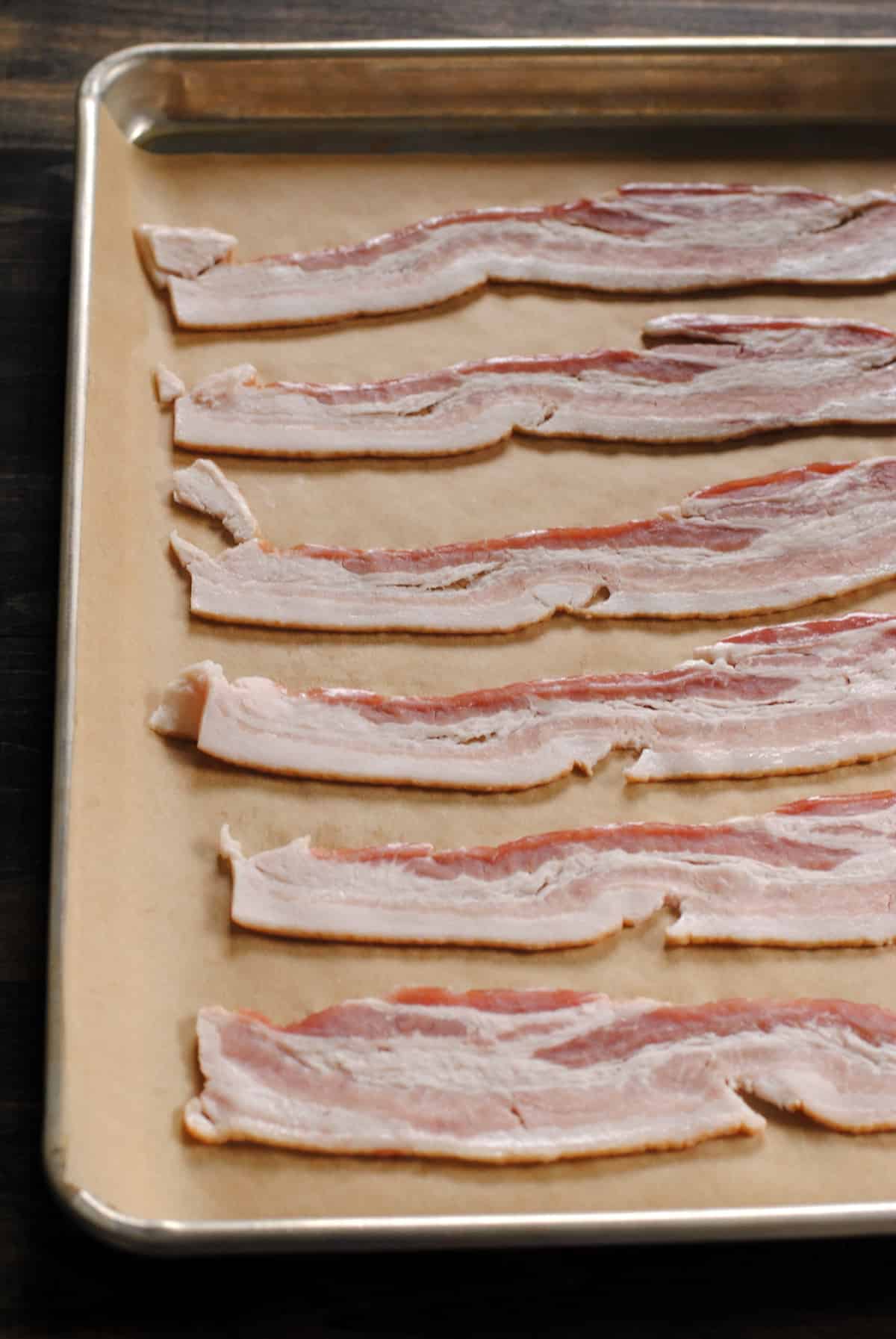 Beyond the less mess/smelliness factor, there are a few other advantages to cooking bacon in the oven. First, it’s a great method to use when you’re preparing brunch for a crowd. The bacon is just cooking away in the oven, unattended to, while you’re finishing up the rest of the meal on the stovetop. Second, you get to eat almost cartoon-like perfect bacon. It’s not shriveled up little pieces – it’s mostly flat, perfectly cooked bacon. Beautiful, beautiful, cartoon bacon.

How to cook bacon in the oven:

Ok, so here we go. Let’s get started with this oven bacon. This will only take a minute. Well, 18 minutes. 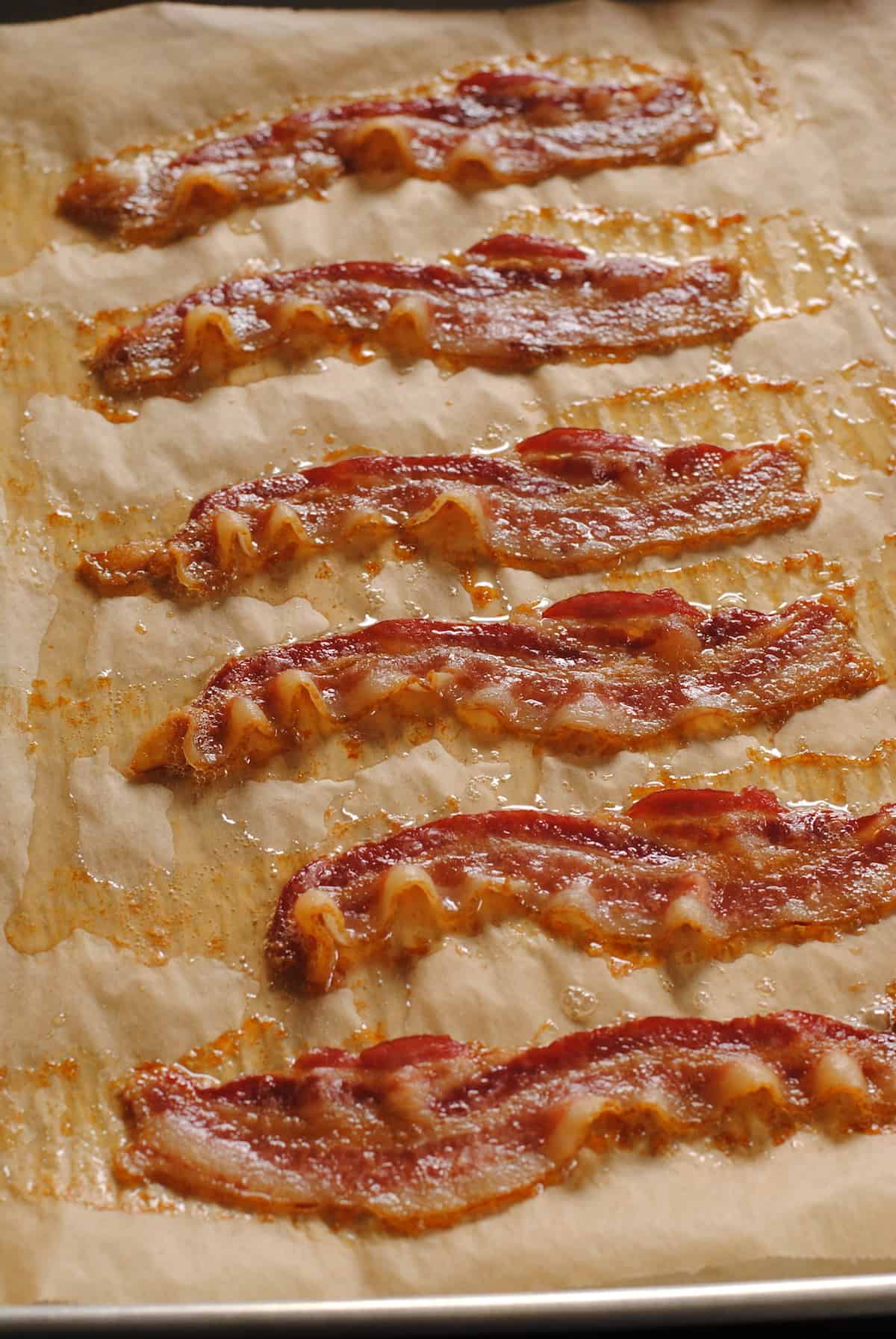 Do I need to preheat my oven? How long does bacon take to cook in the oven?

What temperature oven do I need for bacon?

You have some flexibility here, but I like a 375 degree oven for baked bacon. However, if you have other items going in the oven at the same time (say, a quiche or some breakfast potatoes), and those require a different temperature, don’t worry about it. Just put your bacon in the oven, and adjust the cooking time up or down based on the temperature. As long as you keep an eye on the bacon, it will turn out just fine. 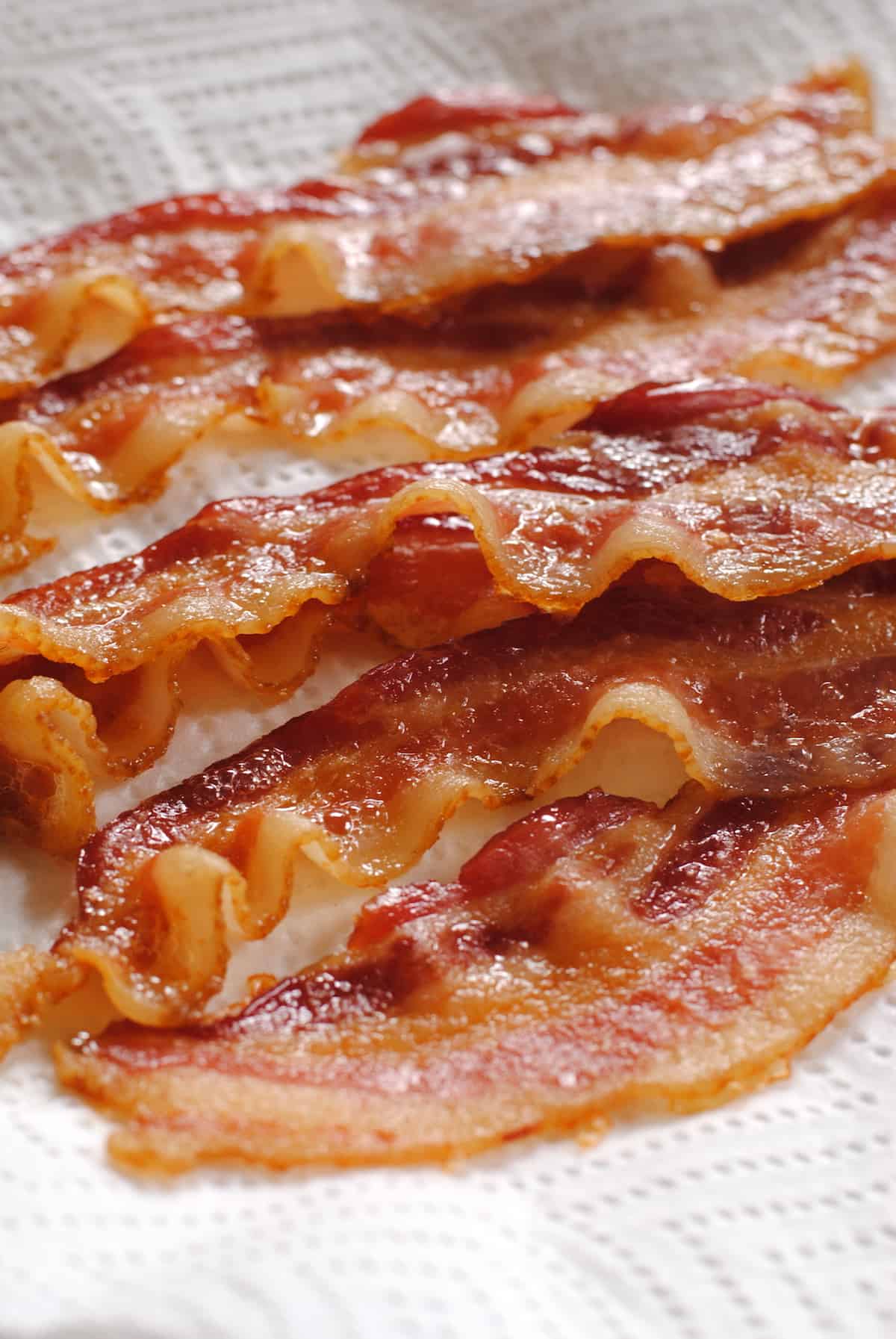 Do I need to flip the bacon?

I do NOT flip it! You’re certainly welcome to flip it if you feel like it, but I never have (we didn’t in culinary school, either), and it still turns out perfectly crispy and delicious.

Home Chef Tip: Don't have time to preheat the oven? You don't have to! Place bacon in cold oven, then turn oven on to 375 degrees F. Increase cooking time to 26 to 28 minutes or until bacon reaches your desired level of crispness.

Delicious Recipes that use bacon: 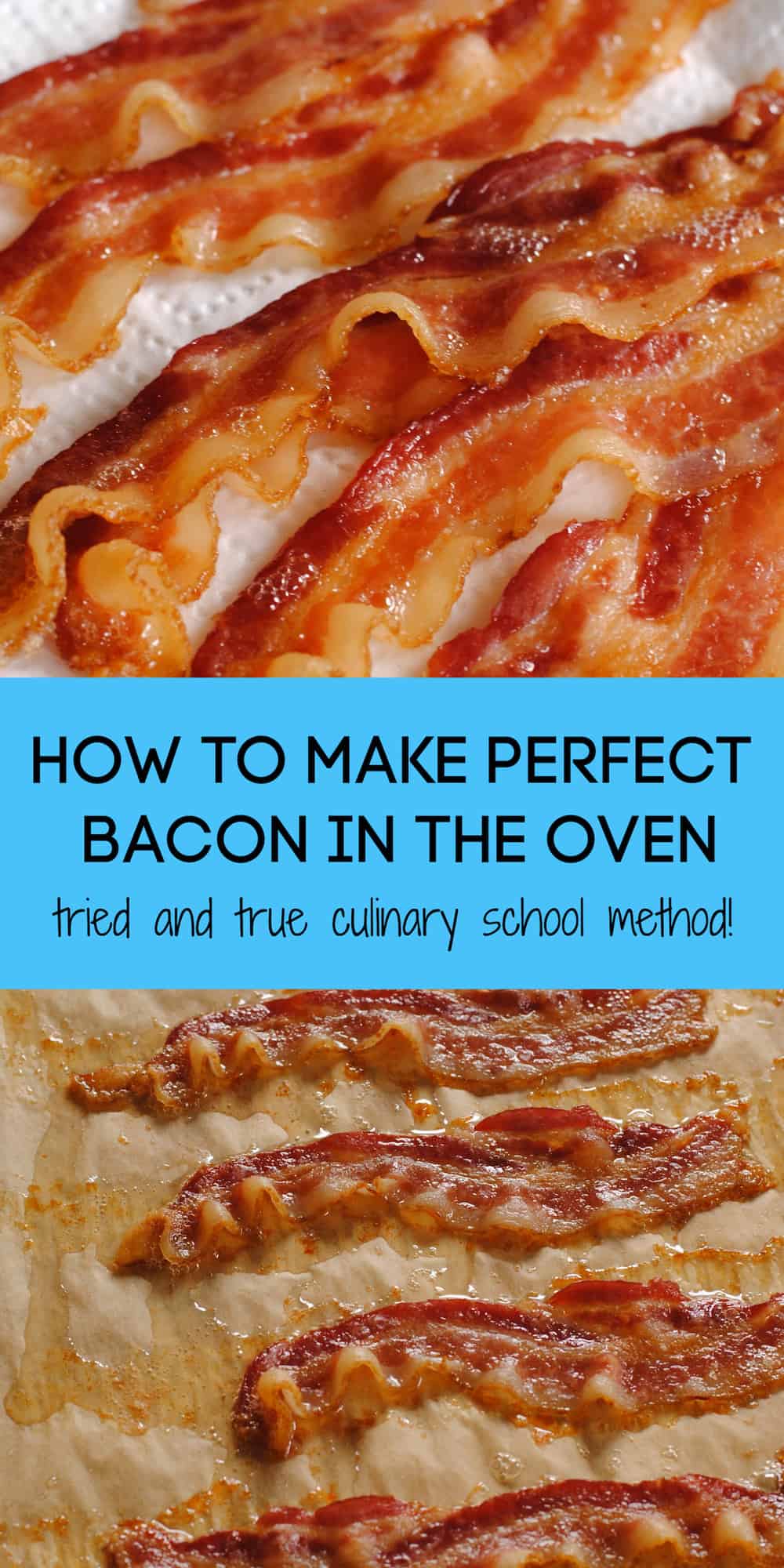 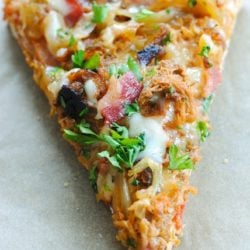 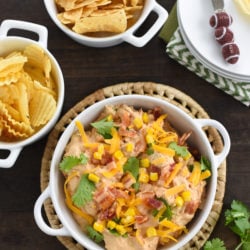 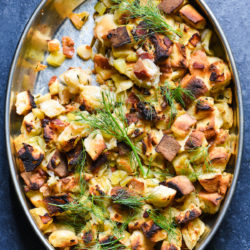