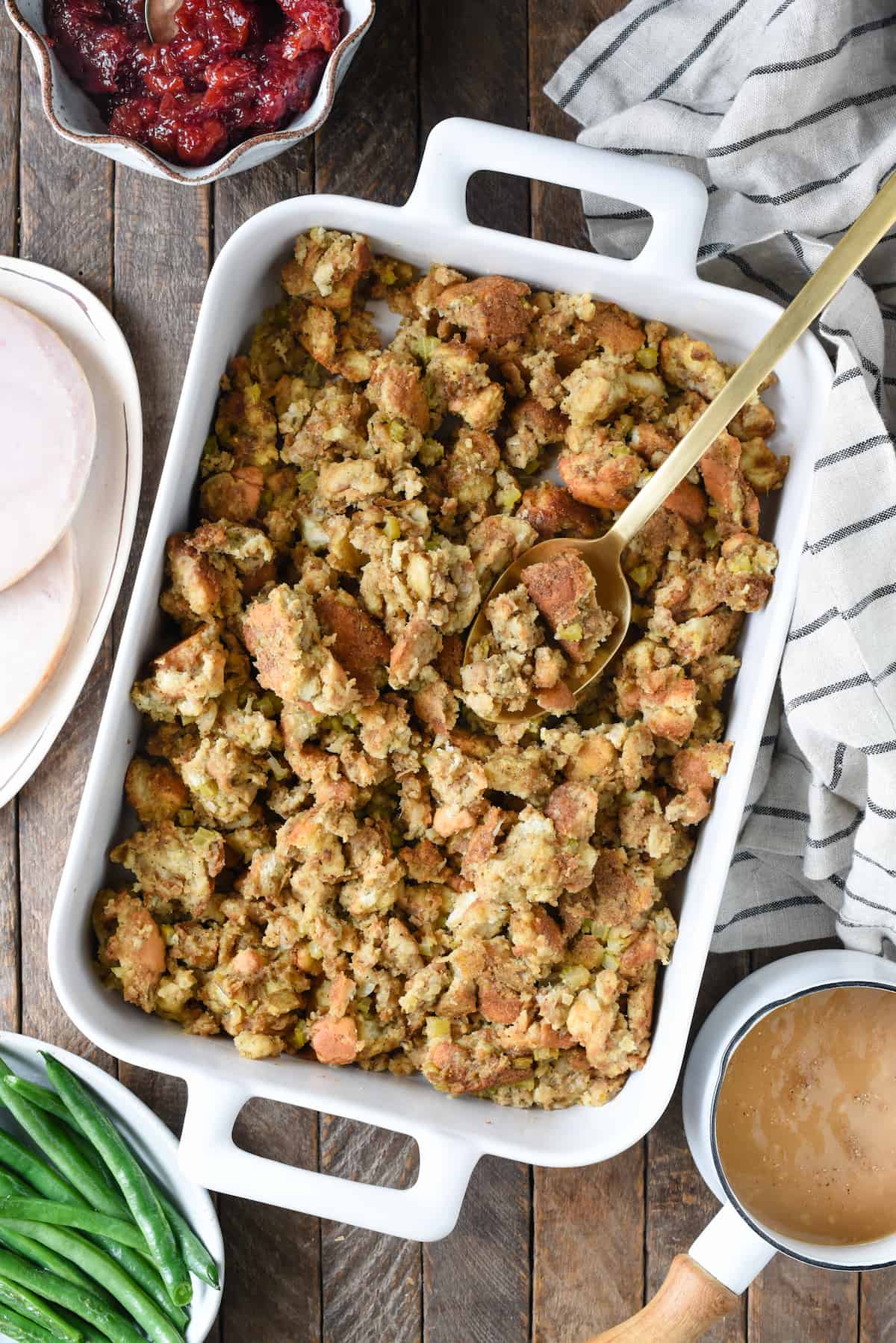 You know how you hear about people taking recipes to their grave? My husband’s grandma (my grandma-in-law?) seriously did that with her Thanksgiving bread stuffing (and yes, we know we’re supposed to say “dressing,” but we still always call if “stuffing” even if it’s not stuffed in the bird).

It was the best turkey stuffing in the whole wide world, and I consider myself a stuffing aficionado, as it’s tied with mashed potatoes with gravy from scratch for my favorite holiday food. It had a simple, comforting flavor and was toasted to perfection.

Try as we might, we never got Mary Ellen to give up the recipe for her turkey stuffing. Without fail, she made it for us every year (even, sweetly, one year when she was too sick to eat Thanksgiving dinner herself). 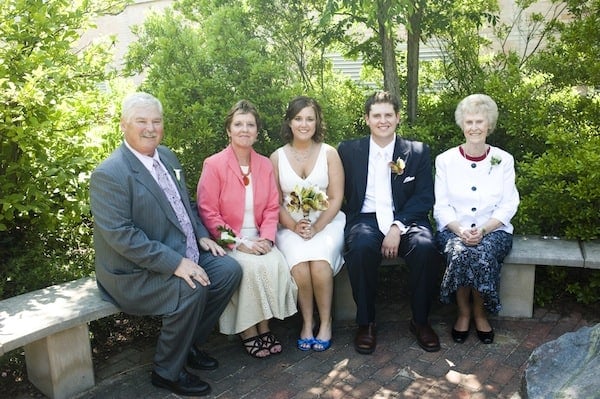 Knowing our time with her was getting shorter, we asked after the recipe for years, and she would only reply “well, I just soak the bread in milk, really.”

That’s the only detail she ever gave up about her turkey stuffing! That the bread was soaked in milk. I mean, I guess it’s better than no details.

I thought that maybe she would write the recipe down, wrap it in a gift box and present it as a wedding present to Jeff and I, but that didn’t happen.

My history of recreating this traditional stuffing:

So, ever since Mary Ellen passed, it’s been my mission to try to recreate this recipe to serve alongside my roasted turkey with maple bourbon glaze and/or baked ham with pineapple sauce, even though I know it’ll never be as good as hers.

Using some educated guesses based on what Jeff’s family and I can remember about the flavor of Grandma’s stuffing, I published my best educated guess of how this stuffing was created.

The stuffing recipe was first published back in 2014, and using reader comments and e-mails from the last few years, I’ve made revisions to the recipe to keep getting it closer and closer to the original.

The recipe card below reflects six years of work, and at least a dozen tests. At this point, I think I’m a close as I can get to honoring the flavors of Mary Ellen’s stuffing.

The recipe in the card below will yield you a delicious old fashioned bread stuffing, I guarantee it. 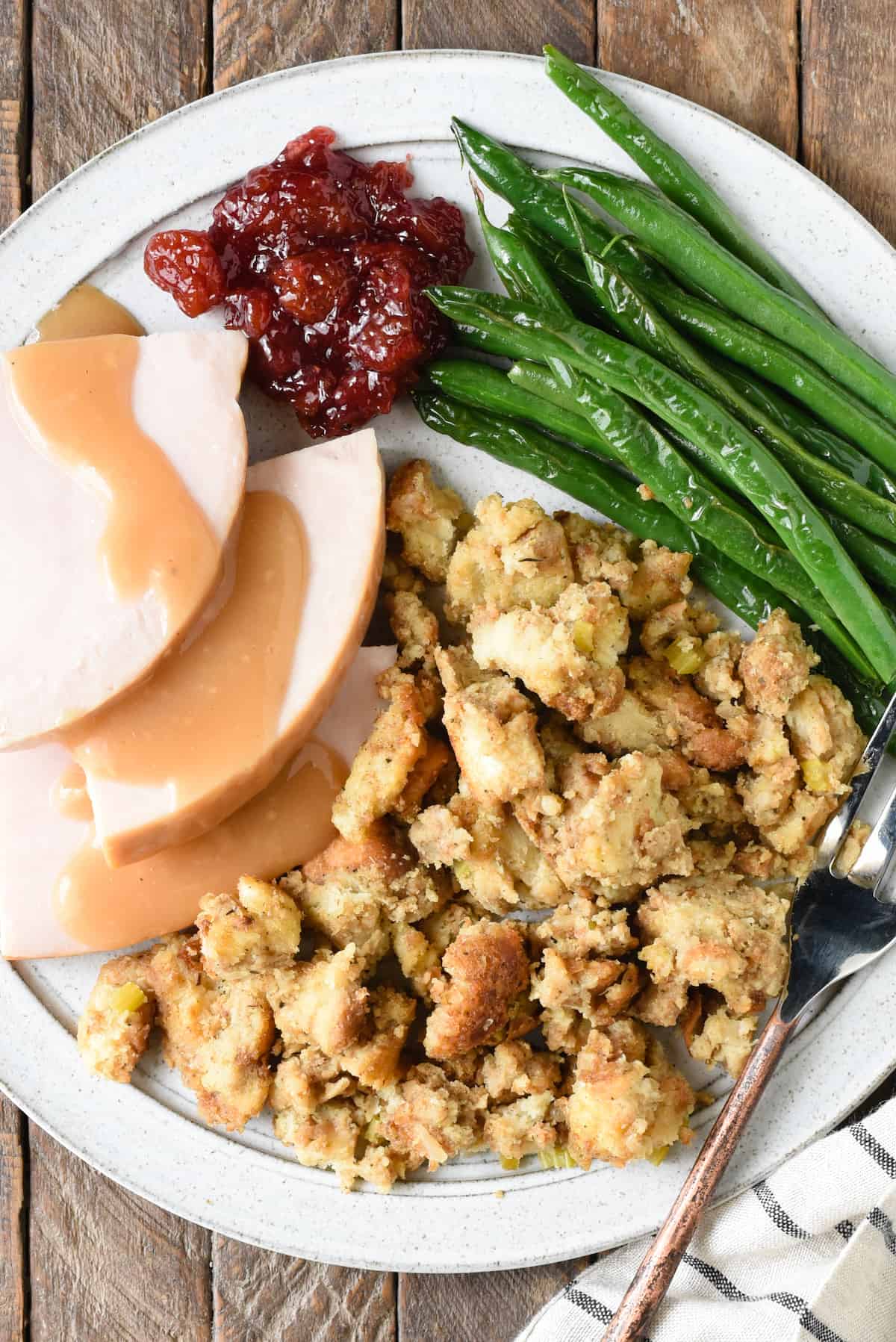 What kind of bread is best for stuffing?

The flavors of Mary Ellen’s stuffing were pretty easy to figure out (leaning on sage, butter, onion and celery). But figuring out the what type of bread to use has been much harder.

At one point, I believe Mary Ellen mentioned that she soaked white bread in milk, and then wrung it out. I’ve tried that several times, but the bread simply falls apart in my hands.

I’ve also tried making this turkey stuffing recipe with ALL toasted white bread, or ALL dried stuffing cubes. It’s fine both of those ways, but the BEST EVER version uses a combination of both.

The combination of fresh white bread (torn by hand, and then toasted in the oven), and a bag of dried stuffing cubes, creates the best flavor and texture for old fashioned bread stuffing. 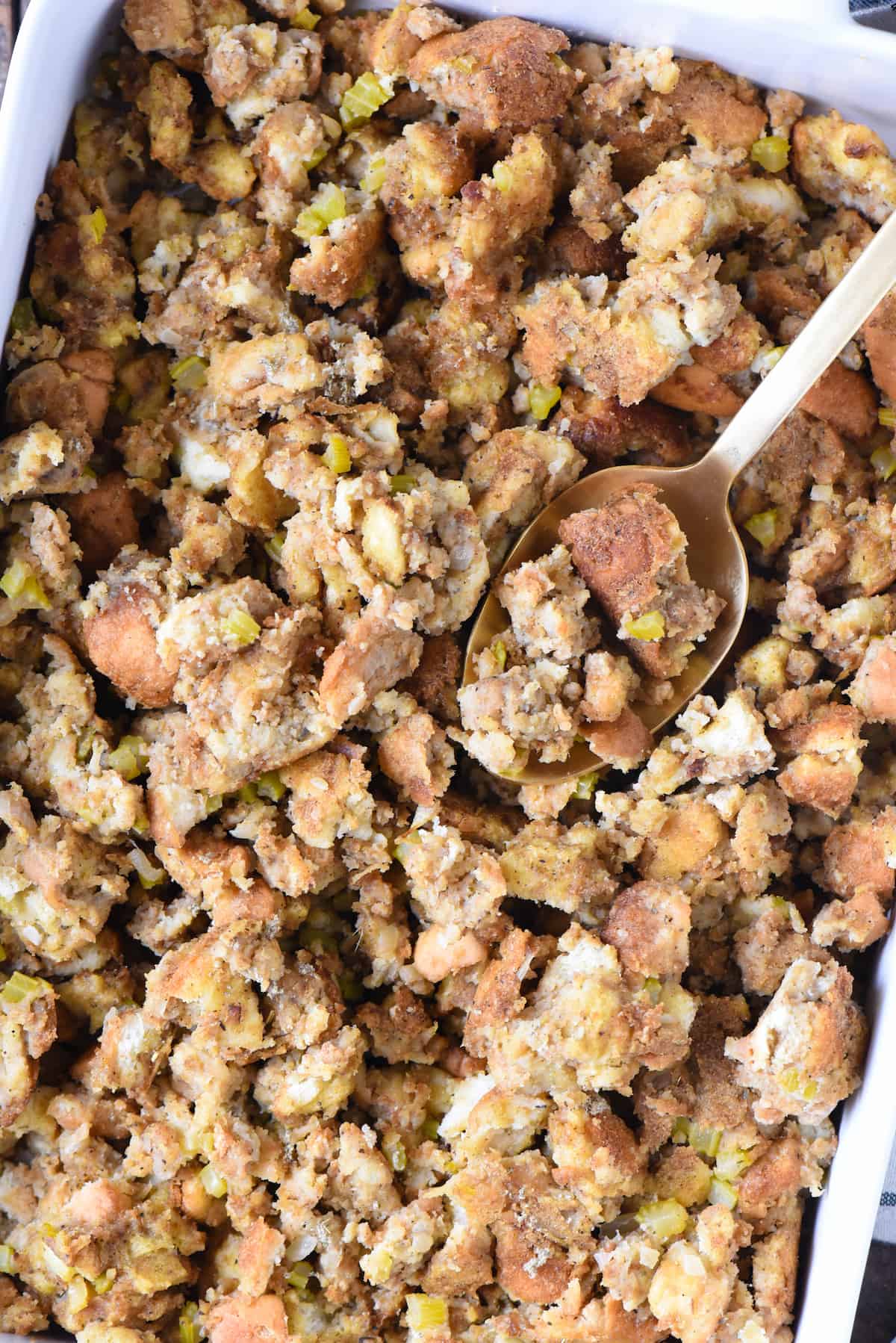 What are the ingredients in Grandma’s Old Fashioned Bread Stuffing? 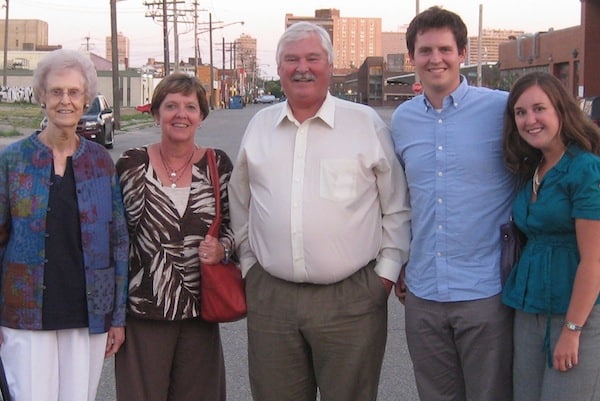 Does your family have a stuffing or dressing recipe similar to Mary Ellen’s? I’d love to hear about it in the comments below!

More side dish recipes to round out your holiday dinner: 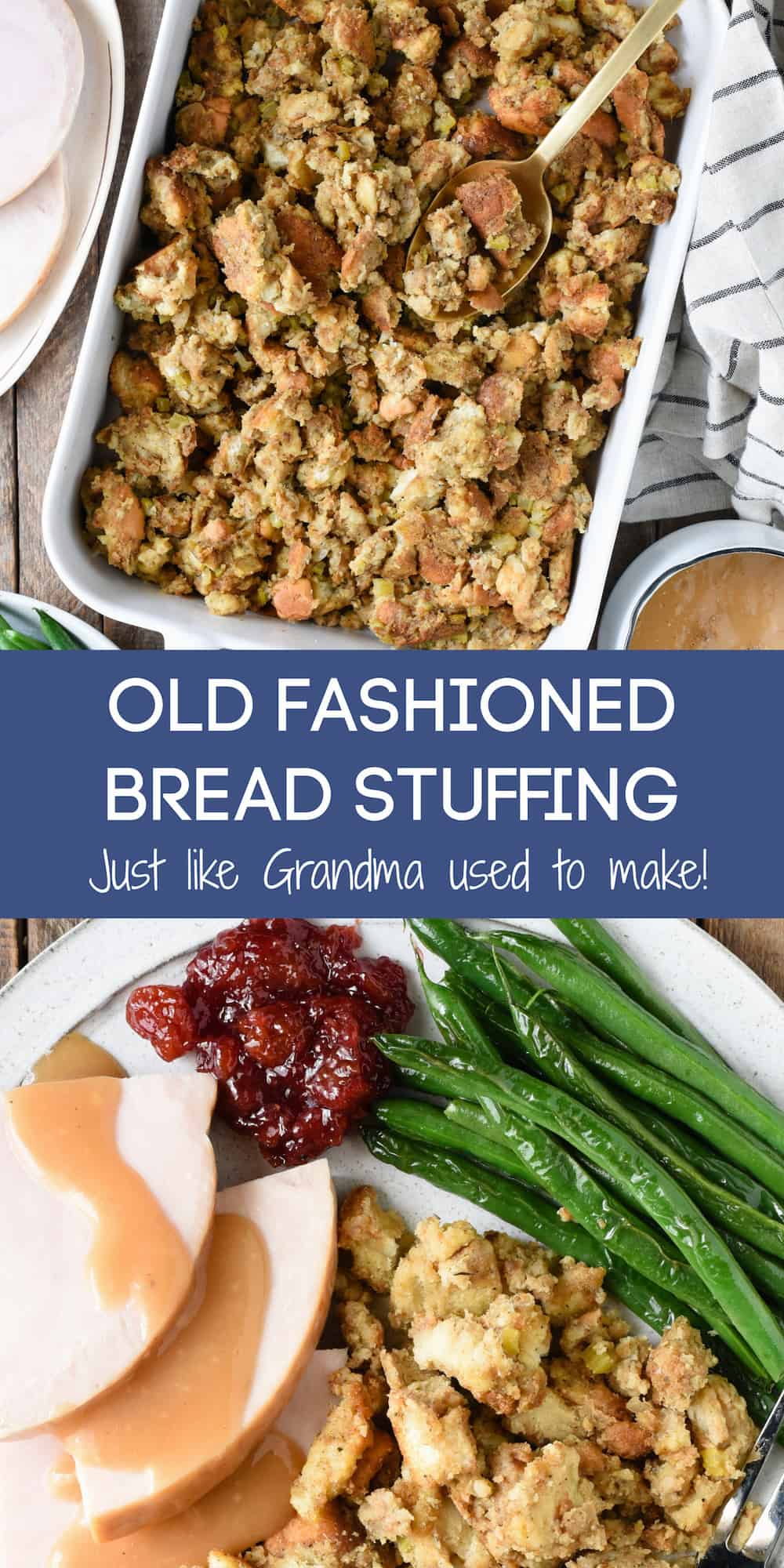 P.S. As noted above, I’ve been working on this recipe since 2014! You may recognize the photos below. They were taken during one of my early attempts at recreating Grandma’s stuffing.

I think I added too much liquid on that try, and the stuffing came out kind of dense. I’ve since improved and updated the recipe to be way better, reflected in the photos above. 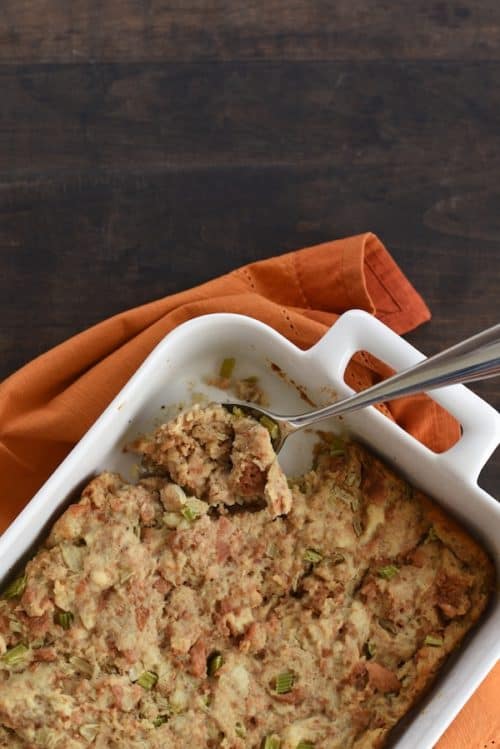 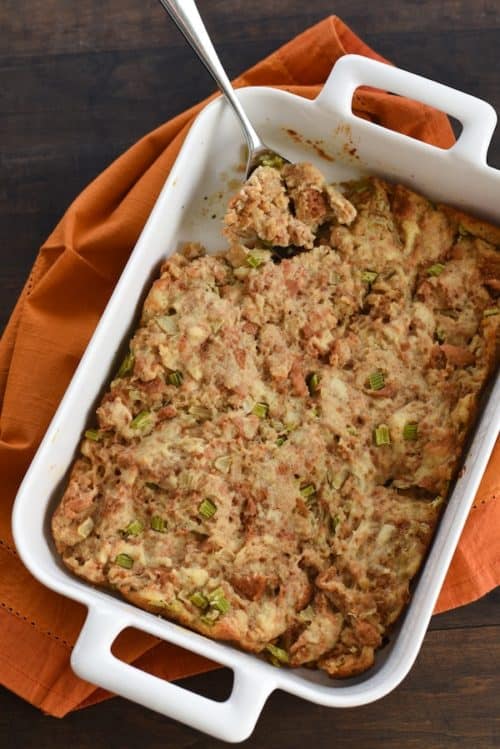 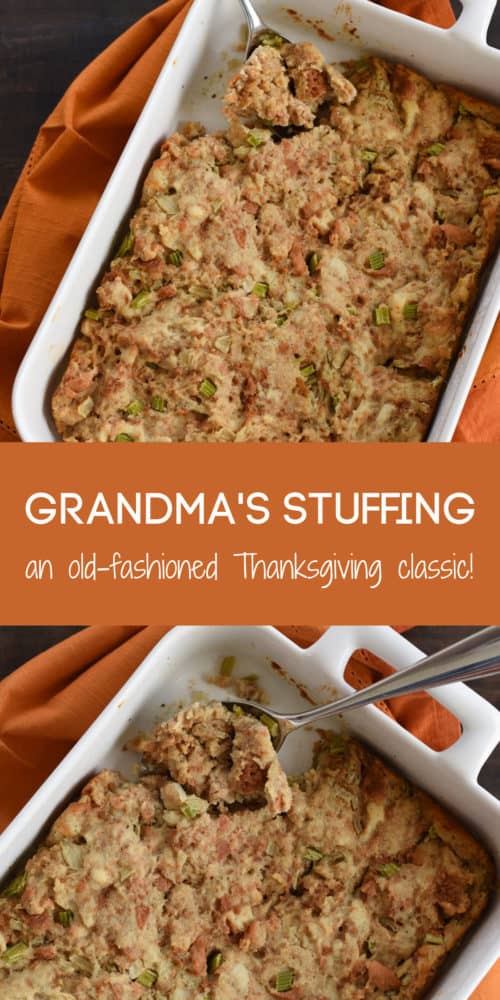