This Ham and Potato Soup is simple and quick to put together with easy-to-find ingredients. Make with leftover ham or any kind of chopped ham. 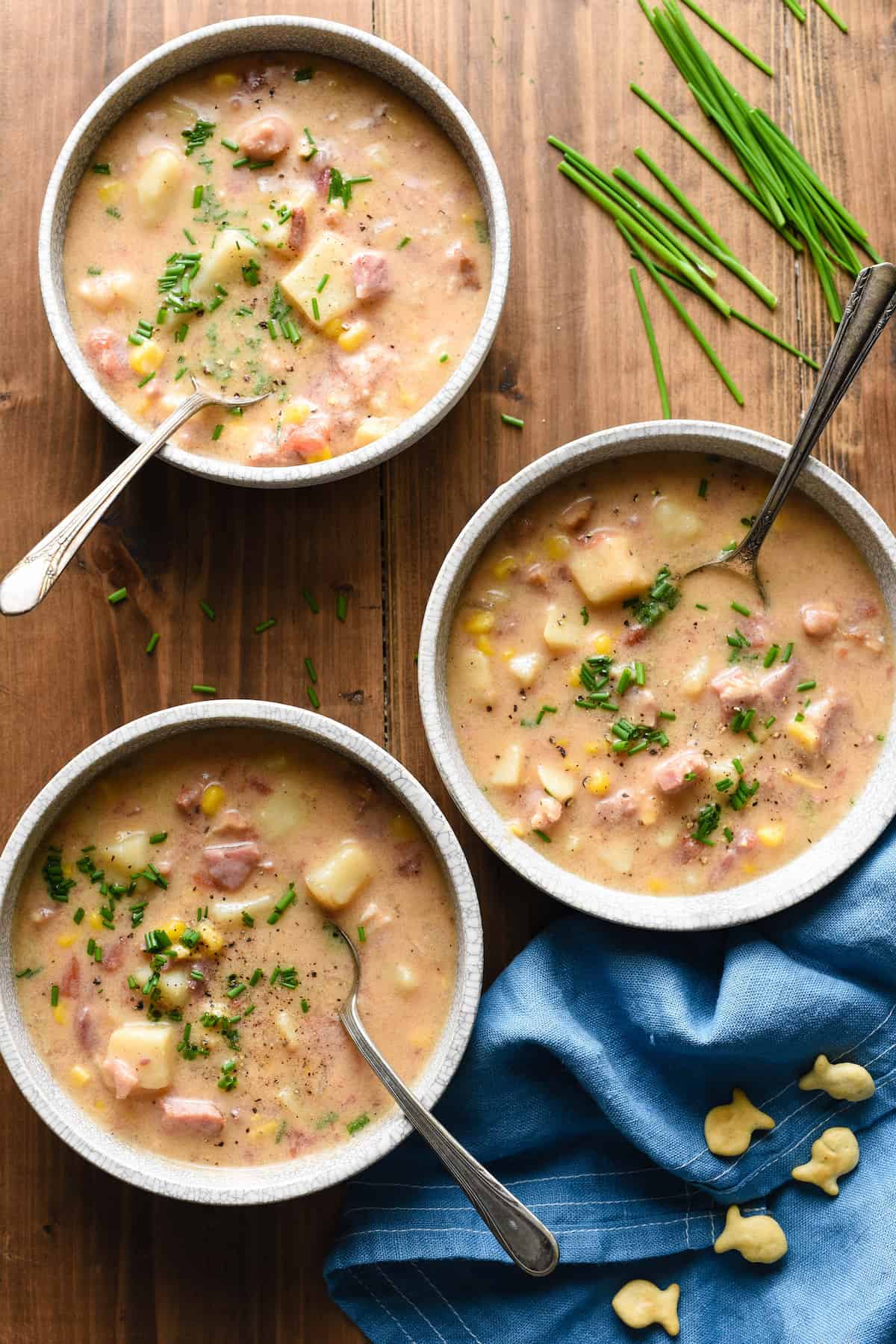 So, we made a traditional Easter dinner a few weeks ago. For two adults and one toddler who really only wants to eat blueberries and goldfish crackers. Needless to say, we had a lot of baked ham with pineapple sauce left (and mashed potatoes, which were turned into mashed potato cakes).

I had hoped to get this soup made, photographed and published in time for you to make it with your leftover ham, too. Alas, that wasn’t meant to be, and I hope you’ll understand. You know how life is right now.

The great news is that we loved this soup so much that we’ll be making it year ’round, even when we don’t necessarily have leftover ham. And while I love a long simmered crockpot soup, this one comes together pretty quickly right on the stovetop.

In fact, I’m already planning on buying a ham steak on a future grocery order so that we can make this soup again!

So even though I didn’t get this published quite as quickly as I had hoped, I hope you’ll find this recipe valuable.

Add a ham steak to your grocery list, or pin this recipe for after Christmas or next Easter.

How to make Ham and Potato Soup:

Jeff actually developed this recipe for us! Don’t worry, he wrote down detailed notes and ingredient amounts. And of course, I did the taste testing and I gave it a (completely unbiased) A+. It was so rich, flavorful and filling!

Even though the star of the show is the ham, you’ll actually start this recipe by frying up some bacon. Whoever decided that “bacon makes everything better” was talking about this soup.

After the bacon starts to crisp, you’ll add onion, potatoes, a can of diced tomatoes with green chilies (Rotel brand is most commonly known), chicken broth, and the leftover ham bone if you happen to have one. If not, no big deal, just skip it!

Once those ingredients simmer until the potatoes start to soften, you’ll add chopped ham and corn. Then, you’ll thicken the soup with a slurry (more on that below) and stir in some cheese!

Lemon juice is added at the final moment to brighten the soup and add acidity, which balances out the rich flavors of the bacon and ham. 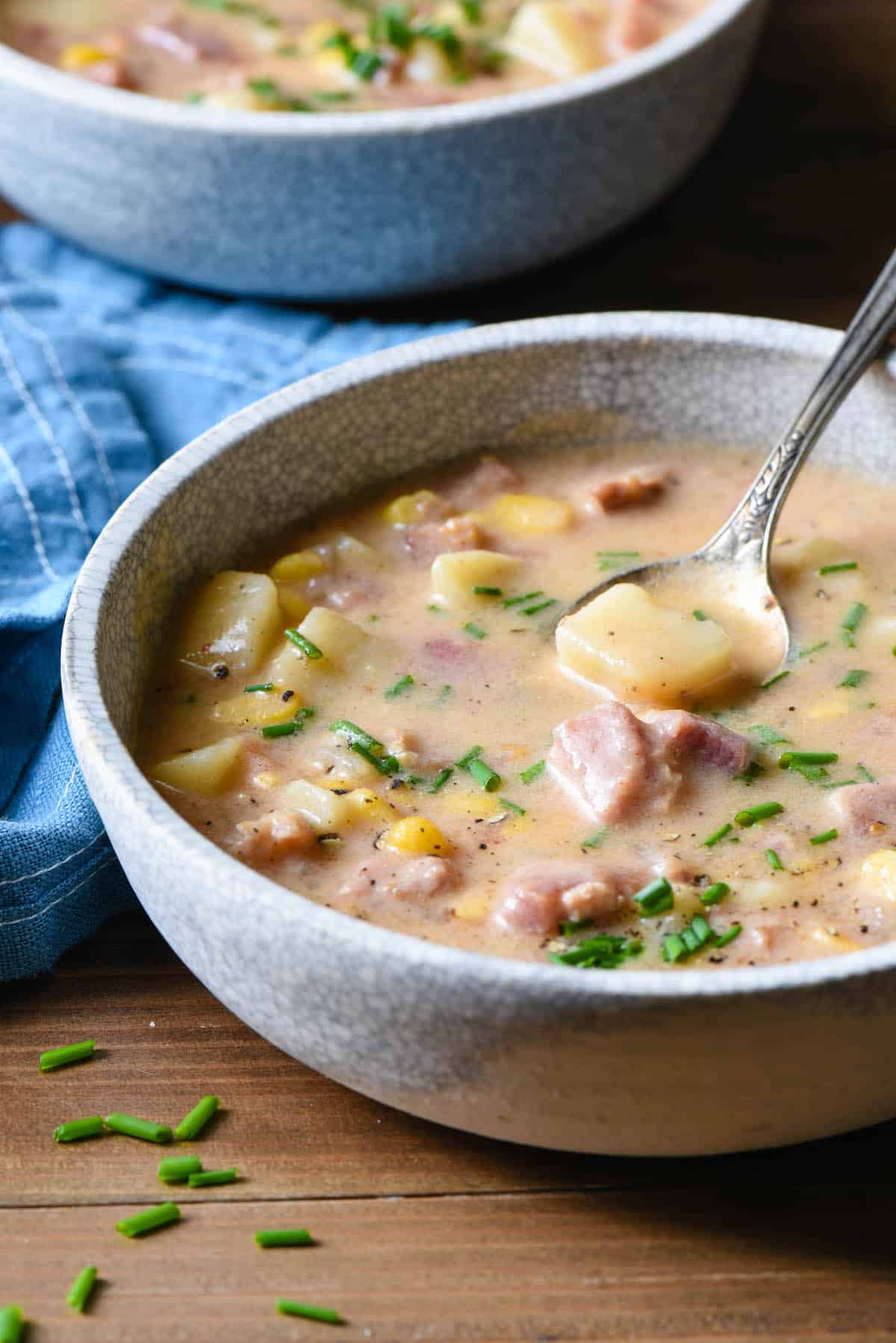 What you’ll need for this ham bone soup:

How do you thicken ham potato soup?

This soup is thickened with a slurry technique. A slurry is a mixture of starch (like flour, cornstarch or arrowroot) and liquid, and it is used to thicken soups and sauces.

In this recipe, we’ve used flour and milk. There are also options below for a gluten free version using cornstarch and milk.

Mixing the starch with liquid before adding it to your soup allows it to be easily stirred into the soup and dispersed.

An important thing to remember when using a slurry is that for the starch to reach it’s thickening potential, the soup MUST be brought to a simmer (just before a boil, if not a slight boil) after the slurry is added.

If you add the slurry and don’t bring your soup to a simmer, the slurry won’t thicken the soup at all. 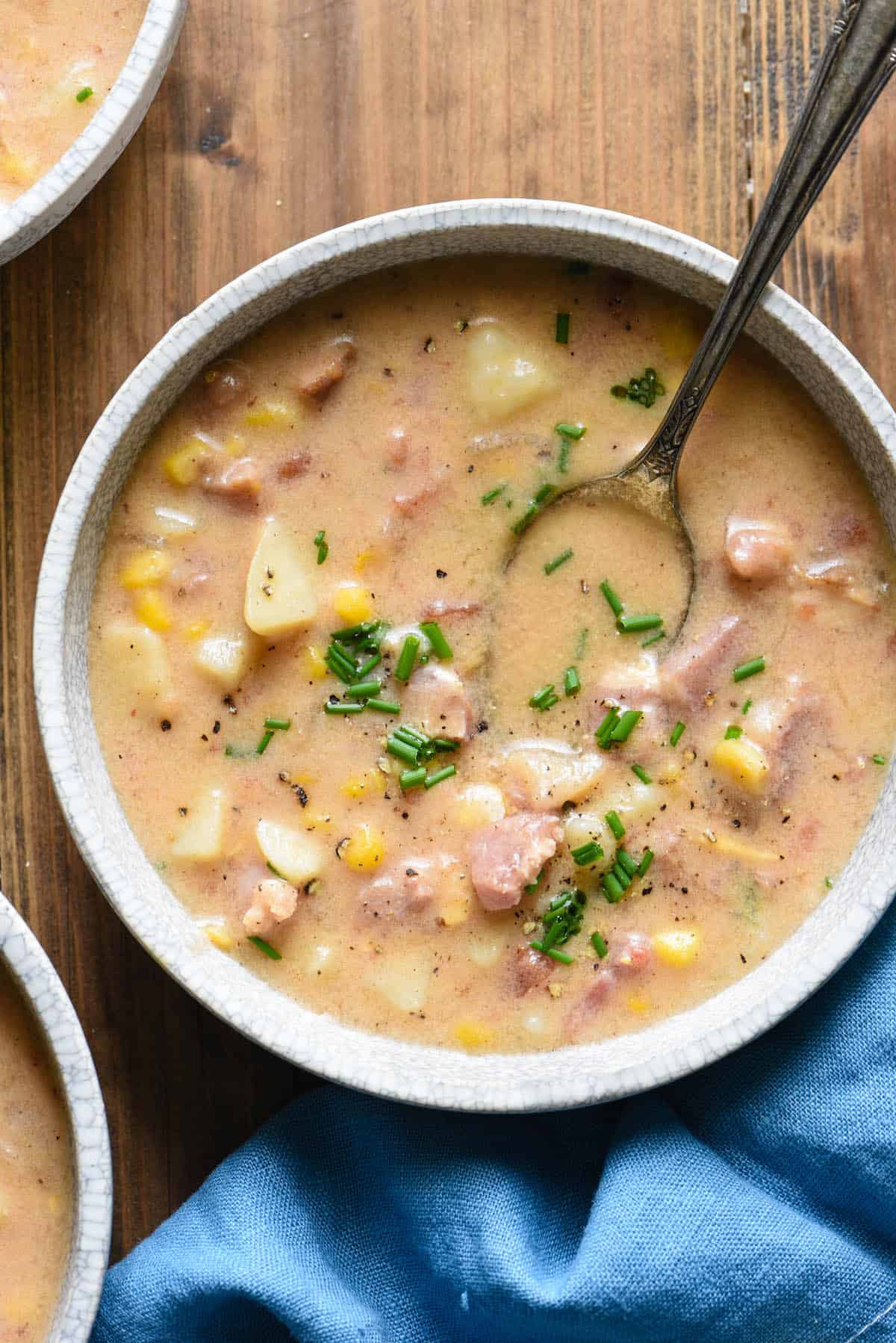 What to eat with ham and potato soup:

This soup is kind of a meal in itself, but if you’d like to serve it with a salad, I’d recommend a simple green salad dressed with citrus salad dressing or creamy lemon feta dressing.

An heirloom tomato and beet salad or cucumber and avocado salad would also be yummy.

If you’d like a little sandwich to go alongside your soup, allow me to suggest a prosciutto and pear sandwich.

How long is this soup good for in the fridge?

If you’re starting this soup using leftover ham, I recommend eating or freezing the soup within 3 days.

If you’re making the soup with a freshly opened ham steak, I recommending eating or freezing within 5 days.

Can ham soup be frozen?

Just like my old fashioned ham and bean soup, this soup can be frozen! The texture of the soup may change a little bit when it’s reheated (the potatoes may become even softer), but if that won’t bother you, I say go for it.

Home Chef Tip: To make a gluten free soup, use cornstarch instead of flour to thicken the soup. Instead of 2 tablespoons flour, use just 1 tablespoon cornstarch. Proceed with the directions in the same way (whisking the milk and cornstarch together).

More recipes that use ham: 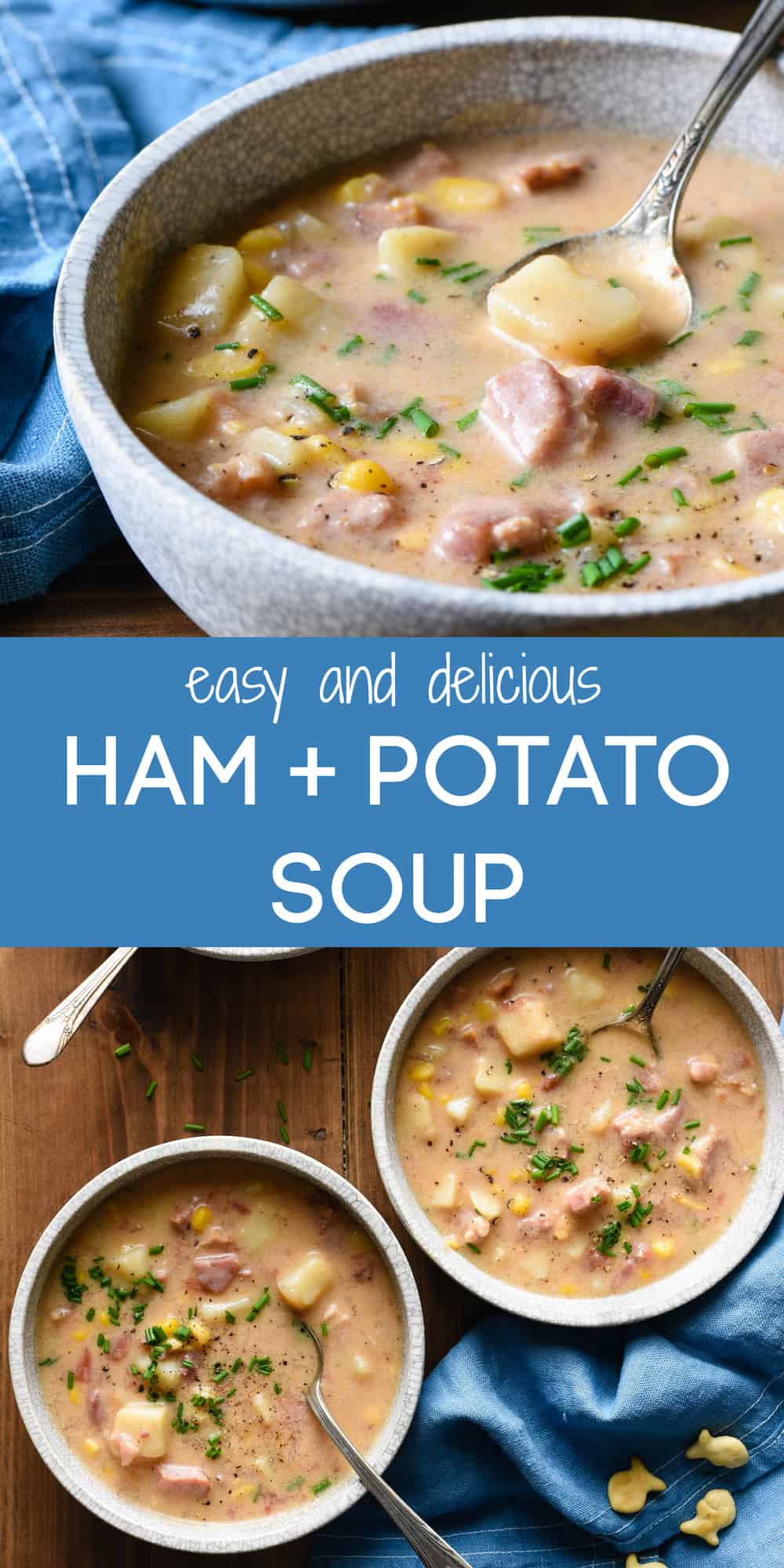 4 comments on “Ham and Potato Soup”