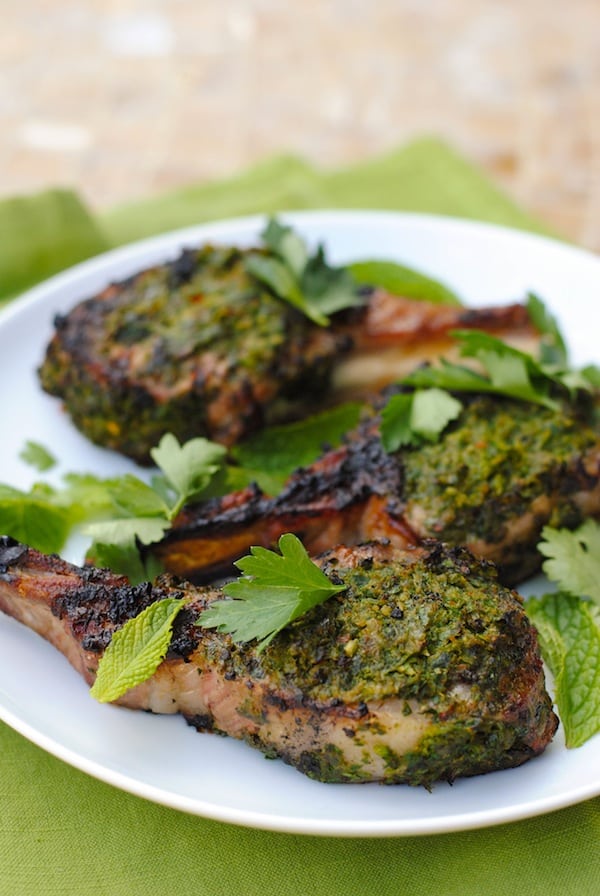 If you follow me on Instagram, you may have noticed that I attended the Food & Wine Conference this past weekend. I won’t be doing a formal recap, but let it suffice to say that I came home grinning from finally getting to hug friends who up until now have lived in my computer, meeting new people, and feeling inspired to keep cooking, writing and photographing.

Speaking of inspiration, one of my favorite things about the weekend was how many people told me “I love your Cook The Cover series!” Some months (like when the recipe is a fail), I’m on the fence about keeping it going, but those comments certainly convinced me to keep it up. 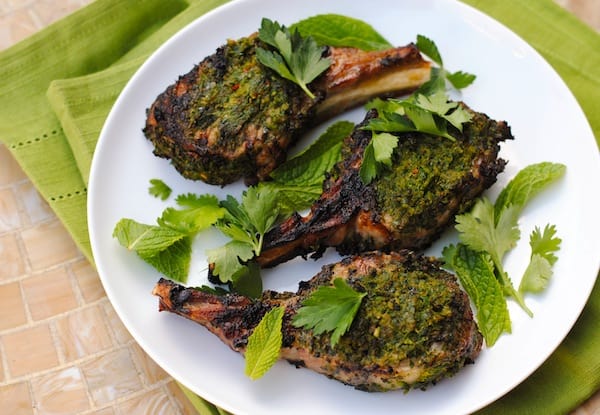 The cover of the July 2014 issue of Bon Appetit featured herb- and spice-crusted grilled lamb chops. I’m all about any excuse to cook and eat lamb (ideally with Greek yogurt mashed potatoes on the side), so I was pretty excited about this one.

I mostly stuck with the original recipe, just adapting the amounts to feed two people instead of eight. However, the herb mixture in this recipe is one that I feel you don’t really need to measure any amounts. Your eyeballs, not your measuring cups, are your best tool here. 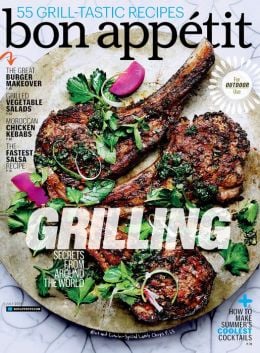 As a general rule, I personally find it a waste of time to measure ingredients for marinades, rubs and the like.

The main goal of these types of things is to get flavor into or on the outside of the meat, and as long as the ratio of these ingredients is more or less correct, the exact amounts aren’t as important.

In other words, I’m too lazy to stuff cilantro and parsley leaves into measuring cups.

Even with my lazy woman’s approach to this recipe, these lamb chops were as tasty as the version served at my favorite Lebanese restaurant.

The herb mixture ended up tasting almost like tabbouleh, but instead of being a side dish, it was serve crusted onto the meat. Gotta love flavor efficiency like that. 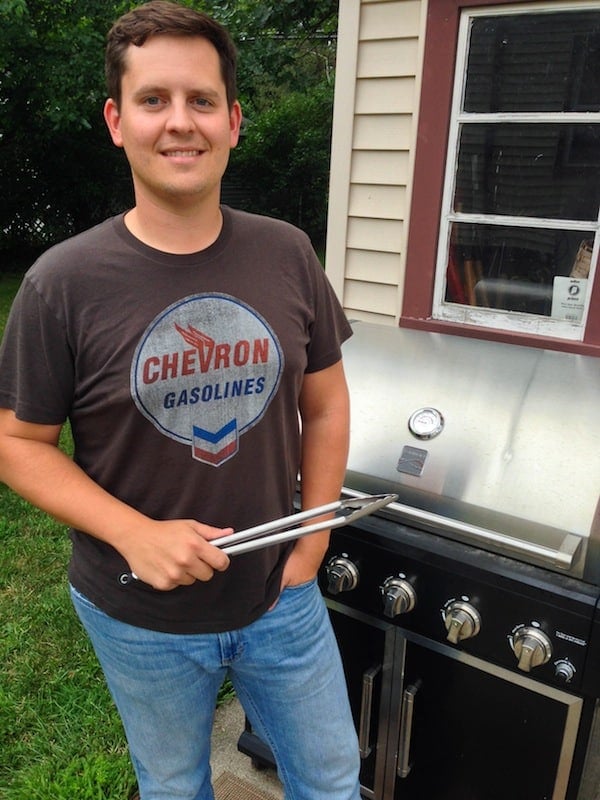 Even Jeff got in on the grilling action, mainly because he was excited to finally have a new pair of grilling tongs, after several years of begging for a pair. Up until now, the poor guy was stuck with my culinary school-issued pair of short, no frills, utility kitchen tongs.

While they mainly did their job, they certainly weren’t long enough for any serious grilling. The back of our grill gets too hot, and those old tongs were just too darn short. Burns ensued, complaining followed.

When OXO kindly offered to send me a selection of their best grilling tools for recipe development purposes, I jumped at the chance, if only so Jeff could finally get a pair of OXO Good Grips 16″ tongs. Look at him smile over that pair of tongs. Smiling, AND grilling his wife lamb chops for dinner. What a difference a good pair of tongs can make in my household. 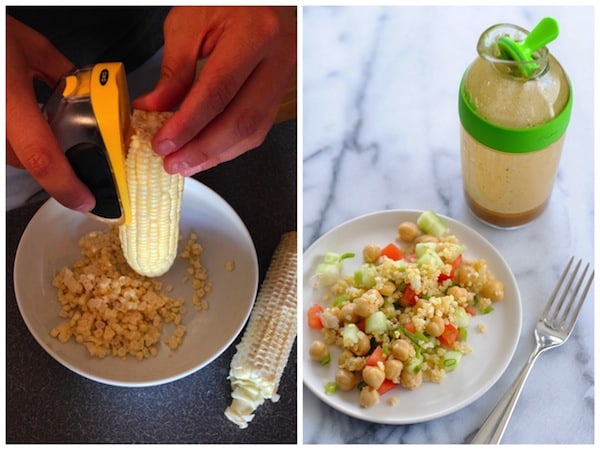 While I keep saying over and over that I’m not a kitchen gadget person, I think that stance might be slowly changing. OXO keeps winning me over with things likes the Corn Stripper. Is it strange that I just thought of an ear of corn swinging around a pole, while gentlemen corn put dollars in her husk? Ummmmm. Moving on.

This tool is clean, efficient, and does exactly what it claims too. I eat a lot of corn in the summer, but jaw problems prevent me from eating it directly off the cob, so this thing will be in heavy rotation throughout the summer.

I’ve also been digging the Little Salad Dressing Shaker for quickly shaking up vinaigrettes for light summer salads, grilled veggies and sliced tomatoes. You can make, pour and store your homemade salad dressings all in this one dishwasher-safe shaker. 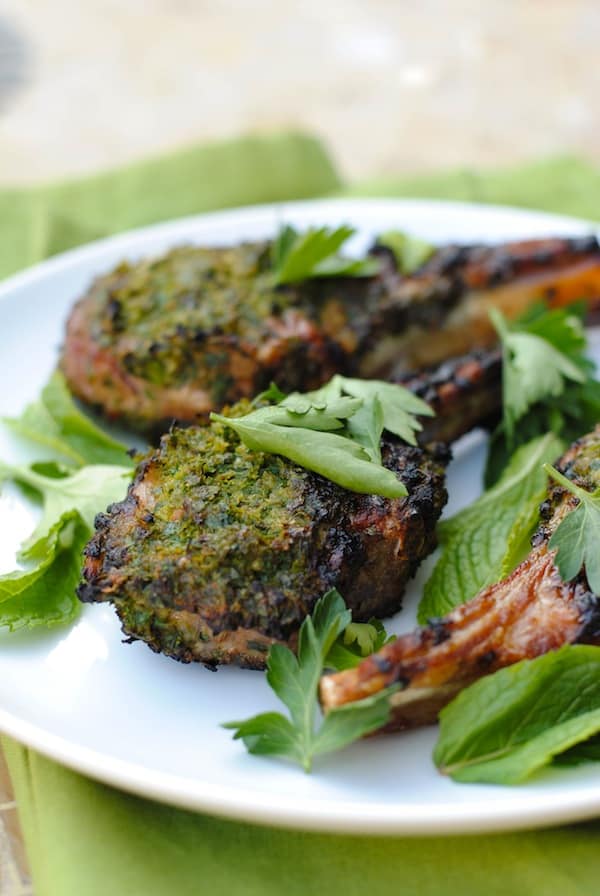 Back to those lamb chops. It’s hard to make hunks of meat look beautiful, but let me tell you, they tasted even better than they looked. Bon Appetit killed it with this recipe this month! Also, I pretty much feel like the Queen of England every time I eat lamb chops at home.

Especially because my dog totally looks like she could be part corgi. Does the Queen still have corgis? Do ears of corn go to strip clubs? These are the kinds of questions I don’t want to have to answer.

Disclosure: I received a set of grilling tools from OXO at no charge. I was not compensated for writing this post, and all opinions are my own.